Features In the Kitchen Ingredients
Back to your roots 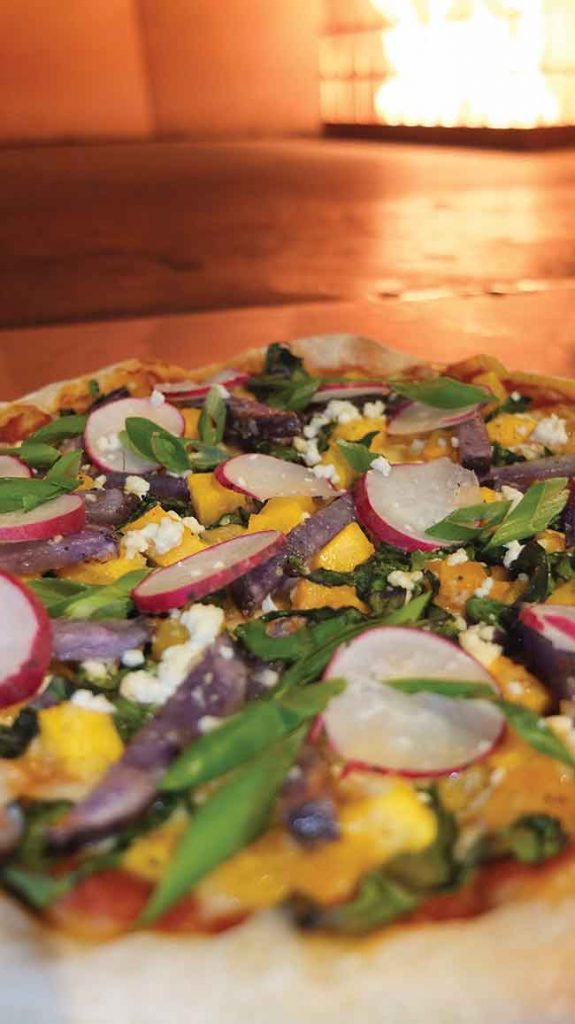 With winter well underway, you may be looking for ways to deliver a heartier winter pizza to hungry hibernators. One fun and relatively painless way to switch up your seasonal menu is to incorporate flavourful, versatile and easy-to-store root vegetables into your pie.

Rocky Mountain Flatbread of Vancouver has been turned on to the benefits of using root vegetables for some time now. Owner Suzanne Fielden says she and her staff use seasonal vegetables such as celeriac root, carrots and beets on their Farmers Market pizza.

They often shred the vegetables and add them directly as toppings. Another method they employ is to season and soften the vegetables beforehand with a mixture of salt, pepper and olive oil.

During the summer, they switch up the vegetable toppings to rhubarb, heirloom tomatoes and other vegetables available locally during that season. Root vegetables are a great choice at Thanksgiving and into fall and winter, when there is more limited choice in vegetables, she says.

To balance flavours, they try to blend sweet vegetables with “icier,” or savoury, ones, she says.

The trick to keeping toppings light is to shred or cube them evenly, she notes. The Farmers Market, their most popular pizza, features three-herb pesto and goat cheese on a thin layer of organic tomato sauce.

She suggests keeping the cheese light as well. They use mozzafina, which is a lighter type of mozzarella akin to goat cheese but less crumbly. Depending on customer requests, they sometimes use no cheese at all.

Rocky Mountain uses produce from local suppliers whenever possible and recently have been working with a purchasing hub run through the Vancouver farmers market out of Richmond, B.C., where they buy vegetables twice a week.

The restaurant also incorporates “fire-roasted” vegetables such as garlic pieces, rutabagas and zucchini into their pizzas as well as butternut squash – with cranberries – around Thanksgiving.

“It’s all about seasoning and not being afraid to include root vegetables,” she says.

Ryan Rivard, executive chef at The Combine restaurant in Simcoe, Ont., is so committed to using fresh, local vegetables, he and Jennifer von Schleinitz, his wife and business partner, cultivated a garden behind their home and restaurant.

The Combine, which specializes in fine dining fare with a strong emphasis on local, features pizza baked in a specially designed handmade brick oven on Tuesday nights. With a garden out back, staff have a variety of fresh vegetables at their disposal during the colder months.

Rivard and his team build an apple bacon cheddar onion pizza on a foundation of white cream sauce flavoured with celeriac root. “Instead of a béchamel we use celeriac as the basis for our white sauce,” Rivard says. They call it the Norfolk ABC for the county where The Combine is located and the elements are all locally sourced, from the aged cheddar to the smoked bacon to the celeriac root right out of the garden.

They cut the bulky, round, brownish root into small cubes and let it simmer at a low temperature, adding the cream and salt.

“We take the ugly and make it beautiful,” he says.

They also like to use caramelized onions and deep-fried shallots and carrots as garnishes, Rivard says. The notion of a casual pub “wing night” inspired a limited-run Buffalo Chicken Pizza featuring celeriac cream, crumbly blue cheese, and shaved celery and the crispy carrots on top.

Because in his case root vegetables are readily available, Rivard sees no down side to using them. “We do have to make sure we get the correct amount of seasoning to give the roots enough flavour,” he said.

Potatoes showed up as toppings on several pizzas in the Canadian Pizza magazine Chef of the Year competitions in October.

Champion of Champions Carlo Raillo’s pumpkin pie pizza featured buffalo mozzarella followed by a combination of mascarpone, ricotta and boiled potato on top of the dough before it went into the oven.

Chef of the Year Joe Leroux incorporated sliced rosemary potatoes as a topping on his winning pie, along with hickory-smoked bacon and red onions.

“And these days the dynamic colours of beets and carrots ranging from yellow to purple make them visually appealing,” Schooley says.

Some adventurous customers like to try vegetables such as salsify that originate in foreign soils, he says. The Ontario Ministry of Agriculture, Food and Rural Affairs looks at the potential of specific vegetables to grow in Canadian soil and places like the Vineland Research Centre in the Niagara region are always running trials and trying to learn which vegetables can be grown on Canadian soil. “Wherever there is a demand, people will find a way to get hold of them,” he says.

Whether your customers are longing for comfort food or hungry for new adventures in taste and texture, working root vegetables into your sauce base or toppings rotation is one inexpensive and risk-free way to sustain them over another Canadian winter.

Root inspiration
Fleshy, edible underground roots or tubers can provide inspiration for your pizza during the winter months when fresh vegetables are hard to come by. Here are a few to consider when you want to give your pizza a comfort-food twist this winter.