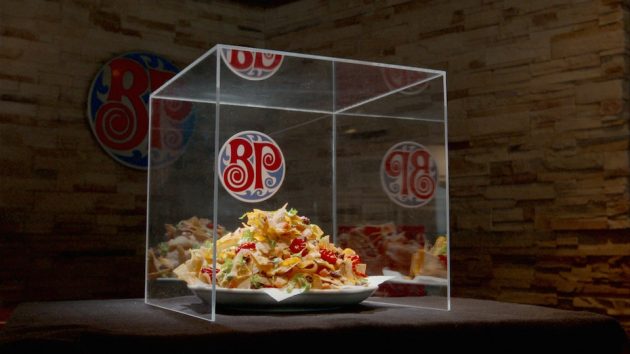 Mississauga, Ont. – In what appears to be some April Fool’s Day fun, Boston Pizza announced the launch of its Hey! That’s Nacho Food Shield.

Boston Pizza calls the shield “a revolutionary new product that will forever change the dining experience.”

“Research conducted by Boston Pizza found the majority of guests love shareable menu items, like nachos, but one in five don’t want to share with their tablemates,” the company said in a news release dated April 1. “That’s why Boston Pizza created the Hey! That’s Nacho Food Shield, an original concept designed to protect guests’ plates from table reach overs, sneaky side attacks and topping touchers.”

Made from sleek, transparent acrylic, the shield is designed to be placed over any dish and offers protection on all sides from hungry friends, family and teammates, the release said.

“Shareable should not equal terrible, which is why we’re excited to introduce the Hey! That’s Nacho Food Shield,” said Steve Silverstone, executive vice-president, marketing for Boston Pizza. “We want guests to finally feel comfortable ordering whatever they want, without fear of sacrificing part of their meal to needy tablemates.”