And the winner is…

For the second consecutive year, Diana Coutu is a
national champion. Coutu, the petite pizzaiolo from Winnipeg, edged out
her competitors in a closely judged contest to become Canadian Pizza
Magazine’s Pizza Chef of the Year. 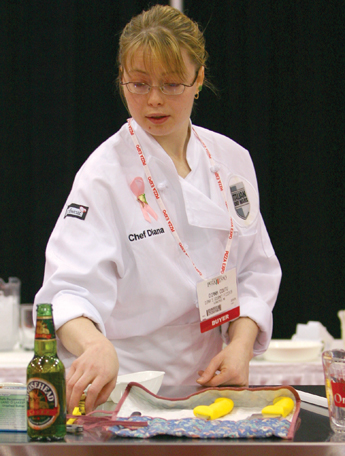 For the second consecutive year, Diana Coutu is a national champion. Coutu, the petite pizzaiolo from Winnipeg, edged out her competitors in a closely judged contest to become Canadian Pizza Magazine’s Pizza Chef of the Year. The annual contest, sponsored by Canada’s national pizza magazine, honours the chef that creates the best three-course meal, with pizza as one of the main components.

When first notified of her accomplishment, Coutu was in Las Vegas touring the premier kitchens in “Sin City” and rubbing elbows with some of America’s hottest culinary wizards.

“If I wasn’t in a restaurant, I’d scream,” she said during the initial phone interview.

Later, when the news had a chance to sink in, Coutu was more philosophical.

“I’m honoured. I really feel that (the championship) further separates me from the ‘generic’ pizza that is out there.”

Coutu, who operates Diana’s Gourmet Pizza on Saint Mary’s Road in Winnipeg with her husband Pierre, received a number one placement from the panel of judges, which included executives from pizzerias, food writers and chefs from outside of the pizza industry. Along with identifying a submission that represents a uniquely Canadian taste, judges made their decisions based on taste, complexity and how the three courses flowed together to create a dining experience.

At Diana’s, the menu is a blend of traditional and gourmet with a healthy serving of contemporary tastes. Her signature, without a doubt, is the Moosehead beer that goes into the crust, paired with her own unique marinara sauce.

“Winning once was great, but this has really positioned mine as a different kind of pizza,” she said. “We’re seeing a demand for better, more discriminating tastes. Customers are looking for better quality and better nutrition.”Of course, the folks at Moosehead are equally thrilled.

“When a third party endorses your product, it reinforces the integrity (of the brand),” said Moosehead spokesman, Joel Levesque, from their Saint John, New Brunswick facility. “This is tremendous for us in brand awareness.”

The Maritimes-based beer-maker is the oldest independent family-owned brewery in Canada. Following Coutu’s win in 2005, the beer-crust pizza took off at her restaurant. With demand so high, explained Levesque, Coutu eventually had to make it a fixture on the menu. When that happened, Moosehead stepped in to create a partnership to help promote their product and her pizza.

Manitoba is a key market for the brewery. They already have a strong partnership with the Manitoba Moose of the American Hockey League.

“And the main thing that has happened with Diana is that she has brought attention to our brand. She’s a great spokesperson for the pizza industry, and for a small business owner – with her husband, Pierre – they do tremendous work.”

Coutu has been riding the tide of success since first being named the 2005 Canadian Pizza Magazine’s Pizza Chef of the Year. Following that victory, she was whisked off to Las Vegas where she competed in Pizza Today Magazine’s Italian Chef Wars. Coutu placed a close second behind the American champion, and in November, she placed fourth in another international pizza competition in New York.

Once again, Coutu will return to Las Vegas March 14-16, for Pizza Today’s 2006 Italian Chef Wars. This competition will pit her against three international champions in a head-to-head battle. Each chef is given the same 34 ingredients and 90 minutes to prepare a $2,000, prize-winning meal: an appetizer, an entrée, and a dessert.  This competition is one of the most renowned in the world, and a good placing would certainly bode well for her bid to represent Canada at the World Pizza Championships in Salsamaggiore, Italy – one of Coutu’s goals.

Going into the Vegas competition, Coutu said she is feeling confident that her recipes will produce success for her.

“I feel I have a good chance,” she said. She has also submitted her pizza recipe for the Pizza Festiva competition, which is also held at the International Pizza Expo.

Due to the nature of this competition, and the fact that Canadian Pizza’s March edition will be published prior to the Chef Wars, the winning recipes are being held under wraps. Coutu’s recipes will appear in the April edition, along with coverage from the International Pizza Expo.•