A bit of ‘pizza medicine’

Tony Hannona is enjoying a little quiet time in his kitchen. With summer moving into a midpoint, lunches are a little more sane. 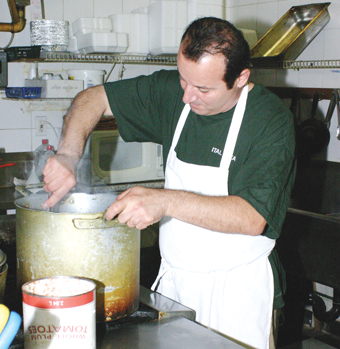 Tony Hannona is enjoying a little quiet time in his kitchen. With summer moving into a midpoint, lunches are a little more sane.

“It’s usually crazy around this time,” he said, indicating to a large clock on the wall.

But the students from a neighbouring high school are on vacation, and Tony has some time to pursue his passion with a little more zeal. He doesn’t hide his love of cooking, something he has pursued from his teen years.

It was that passion that took him from his native Iraq, through the Mediterranean region, the United States, and finally to the mid-sized college city of Barrie, about an hour north of Toronto. While Tony was in Virginia, at Old Chicago Pizzeria, he developed a love for the pie, and worked his way to a best pizza in Virginia title.

“When I cook, just watch, the girls from the plaza will be in here,” he said, with a nod to the open front door. Nothing like advertising a little bit through the olfactory senses.

Tony and his wife Monti pride themselves on the successful run they have made with Ital Pizza in Barrie. Starting out as employees, they worked their way along to ownership in 2000. Since then they become local celebrities, partly with their ties to the war-torn nation, but more so from the huge individual slices they serve over the counter. One of their slices is easily the size of some others’ small pizzas.

And, as Monti suggests, quality.

“You feed your customers what you eat,” she said while her husband continued to prepare his sauce for the day. “And everything is from scratch. A big company will spend a lot of money on their image and uniforms. I’d rather spend that money on quality ingredients and food.”

Tony’s specialty is his sauce. “The most important pieces are the sauce and the dough.”

Pausing from stirring his pot of homemade sauce on the stove, Tony looks a little thoughtful at a subsequent question.
“Let me give you some of my pizza medicine,” he said in response.

“If you have heartburn, eat my pizza. You will never get heartburn from my pizza; and you know why? It’s the sauce, and the ingredients in the sauce.”

He sees these as also the two most distinguishing features for a small pizzeria. The competition in his neighbourhood have large corporate marketing budgets and cut-rate prices.

When they first came to Ital Pizza in 1998, they were the only pizza place around. With Barrie booming as a bedroom community for the ever-expanding Toronto, there’s easily 10 pizzerias within a four kilometre radius, including a fair share of the low-price shops.

“I don’t agree with people selling their pizza for next to nothing. You should take pride in your product,” he said. His customers stand behind him with almost unwavering loyalty. His word of mouth brand of advertising has secured him a healthy piece of the
market.

“People know they are getting quality. We answer the phones ourselves and these customers are like family,” said Monti. “It’s an old fashion style. But we’re still human and we need that ‘warmth’.”

As an independent in a market swamped with chain pizzerias, Tony is pretty realistic about the challenges of the industry. The cost of food and ingredients is one of the largest hurdles for the smaller operator, he said. And with cheese prices continually climbing, there is pressure on the margins to keep things in line.

Tony freely admits he is not the cheapest pizzeria in his neighbourhood, but he said he’s not about to cut corners to compete on price. “I know what kind of pizza is going to come out.”

Both husband and wife have concerns about where the industry is headed, as more and more independents find themselves in the pricing whirlpool. Tony is adamant that he will not go to a 2-for-1 strategy like his competitors. He clearly states that anyone who does the math on those deals, and make the comparisons will figure out it’s no deal.

Ital Pizza offers a two-pie package; it’s called the “double.” And the package is priced accordingly, and the pies match the sizes reflected on the menu board.

“We’re very honest with our customers, and we don’t mislead customers about prices,” Tony said.

Consistency is very important to him. “This is mama’s dough, made the old-fashioned way.”•